MEMBERS of the public and the Leongatha Fire Brigade came to the rescue of an injured koala after it was found bleeding up a tree on Friday morning.

The koala was found on Greenwood Parade outside Leongatha Healthcare at about 11.30am.

“It was a strange call out to get. Normally it’s a cat stuck up a tree, not a koala,” First Lieutenant Scott Hillis of Leongatha CFA said….

Four people were required to stretch out the sheet that caught the koalas fall.

A member of the public spotted the koala and reported it to wildlife rescue.

The koala was taken to a vet clinic in Traralgon.

Due to a missing incisor and another worn down incisor, the koala was emaciated and could not eat.

He also had a bone infection in his jaw.

Unfortunately, due to his condition, the koala was unable to be saved. 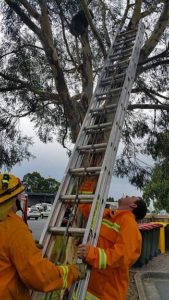